Geeking out over ancient languages and scripts

I’m no linguist. But right now, I am very excited about languages, scripts, how they came into being, and how they evolved. I’ve been working on a new novel for the last few months, a supernatural fantasy set in medieval India, populated by mythical monsters. It’s been a lot of fun. For the first time, I’ve used several Hindi and Sanskrit words in my work, so I’ve been working on a glossary at the same time. I think the glossary has been at least as much fun to write as the novel itself, hah. As part of my research into the languages spoken in medieval India, I realized some startling things. Note: this is a long and possibly boring post.

The first is that a single word in language A can require an entire paragraph of explanation in language B because the concept represented by that word simply does not exist in culture B. Take the word karma. It is the sum total of a person’s intentions and actions. Every intent, effort, and action has consequences, not just in the current life, but in future lives as well. The meaning is evident to anyone brought up in India, but the word has no translation in English.

Another word which is even more difficult to explain is dharma. I’ve seen it translated as ‘religion’ or “law” but this is not accurate. It originates from the Sanskrit “dhrii” which means to support, hold up, or to bear. Dharma thus implies the essential virtues necessary to uphold what is right and good. It encompasses the moral duties, laws, and codes of conduct that make up the right way of living and promote universal harmony. See? I needed so many words, and I’ve still not given you a complete understanding of its meaning.

Wheel of the chariot of the sun, Konark Sun Temple. The wheel of Dharma, or Dharmachakra, is a common symbol in Hinduism, Buddhism, and Jainism.

Some of you may be familiar with the hypothesis of linguistic relativity, which claims that the structure of a language influences its speakers’ world view, and thus people’s perceptions are relative to their spoken language. I don’t know to what extent that is true, but what cannot be denied is that language is a window into the perceptions, ways of thinking and belief systems of a people.

The second amazing thing, which I should have realized earlier, is that nobody knows the original script for Sanskrit! I had Sanskrit until Grade 8, and we learned it in the Devanagari script. But for centuries, Sanskrit has been written and read by academics, priests etc. in whichever regional script dominated their place of residence. (Note: India has 22 regional languages.)

The earliest deciphered writing found in India are the Edicts of Ashoka from the 3rd century BCE, written in four scripts: Brahmi, Kharosthi, Greek and Aramaic. But the languages used are Prakrit, Greek and Aramaic. Not Sanskrit! Could it be because these are Buddhist teachings, and the Buddha preached in Pali so that the common people could understand him? Sanskrit by this stage was already a language of the elite academic / priestly class as opposed to being a language for the masses. However, Sanskrit must have been much more widely spoken before this. 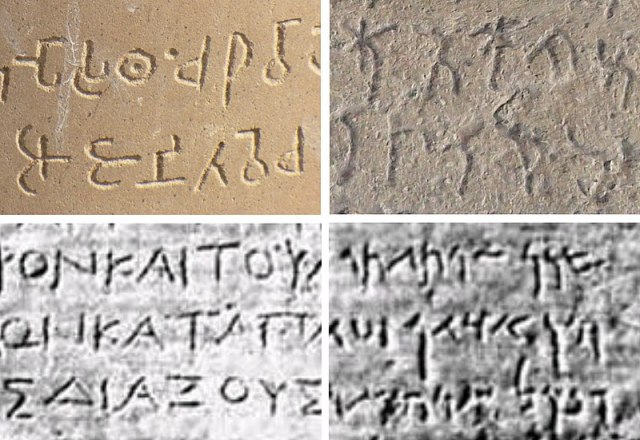 The earliest inscriptions of Sanskrit found in India are in the Brahmi script and date to the first century BCE. By the first century CE, we find inscriptions in the Nagari script (the ancestor of Devanagari script) as well. However, Sanskrit had been around for over a thousand years by then. The Rigveda was composed between 1500 and 1200 BCE and transmitted orally for centuries. But does this mean Sanskrit was an oral language to start with? Or did it have a writing system that is now lost to us? If it did, it might be closer to the Roman script than Devanagari.

To explain this wild-sounding surmise, let’s begin at the beginning, or at least as far back as is sensible.

Note: I am not going to discuss the Indus script from the third millennium BCE because no one has deciphered it. It’s a huge mystery. There isn’t even consensus that it’s a script for recording a language.

The Origins of Sanskrit

The earliest known inscriptions of Vedic Sanskrit have been found not in India, but in northern Syria, at a time when it was ruled by the Mitanni dynasty. The inscriptions are in cuneiform script, include known Sanskrit words and Vedic deities like Indra and Varuna, and are dated 1380 BC. Mitanni warriors were called marya, the term for young male warrior in Sanskrit as well. Mitanni kings had Sanskrit names. What this means is that Vedic Sanskrit predates the Rigveda and, even more interesting, the religious and moral beliefs encoded in the Rigveda and the pantheon of deities glorified in its hymns existed before the compilation of this most ancient of Vedic texts.

How did this happen? Migration. Specifically, the movement of a people from Central Asia west toward Syria, and east toward northwest India. Before I continue, let me quickly sum up 6000 years of (one branch of) Indian linguistic history for you. This is how language evolved in northwest India into Hindi, which is my mother tongue:

Some of the earliest speakers of Proto-Indo-Iranian emerged in 2000 BCE in the central Eurasian steppe, representing the Andronovo culture. Over time they moved south toward the BMAC, another bronze age civilization of Central Asia. Proto-Indo-Aryan likely developed in this hybrid culture before moving south to northwest India and west to Syria. Proto-Indo-Aryan is very closely related to Vedic Sanskrit. 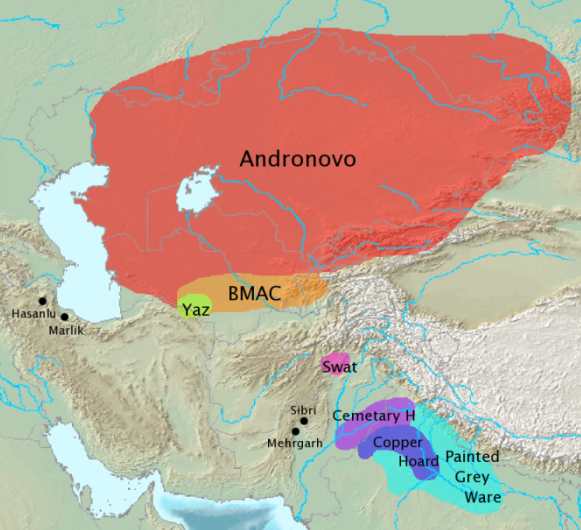 Anyway, I was talking about the mystery of the original script of Sanskrit. Consider that Sanskrit has descended from Proto-Indo-European, and so have Latin and Greek. Here is the Indo-European Tree. The Greek alphabet emerged by the 8th century BCE. Brahmi probably emerged sometime in the 4th century BCE but there is no consensus on whether it developed indigenously or was borrowed / inspired by a Semitic script. Ancient India had a very strong oral tradition but it seems a little unbelievable that they did not have a writing system prior to the development of Brahmi.

The Sanskrit grammarian Panini wrote the Aṣṭādhyāyī, a treatise on Sanskrit grammar, somewhere between the fourth and the sixth century BCE. He cites several grammarians before him as well.  It is evident from the words he uses that he knew of a system of writing. Logically, a work of grammar presupposes writing. What was it? Did it resemble the Greek alphabet? That’s a question I’d love to know the answer to.

I don’t have a pithy conclusion to this post, sorry. I might continue thinking about and researching this topic further.

Note: If you are interested, I highly recommend taking a look at this fascinating graphic of the 100 most-spoken languages in the world.