Poems on the Underground 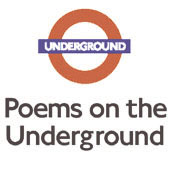 Twenty years ago, a friend of mine from England gave me a beautiful gift: a book titled Poems on the Underground, a collection of poems that were selected to be displayed on unlet advertising spaces in the London Tube. The reasoning was that the Underground is an inescapable part of life for commuters, and we all have a yearning for poetry, or at least prefer reading poetry to ads. The project was a hit with commuters. And I still have my amazing book. The poems are as vibrant as ever.

The Toronto Subway followed suit with a ‘Poetry on the Way’ program – although this was on the initiative of an individual rather than the TTC. I can recollect a poem or two many years ago, lightening my heart and my commute. But the program ended in 2011. In recent years, all one sees are advertisements, advertisements, and more advertisements. There aren’t even any vacant spaces where one could imagine a poem. I asked TTC spokesman Brad Ross about this once, and he said that they needed all the space they had for generating revenue.

Well, fine. Revenue is important. But poems on the train are a public good. Surely just one tiny poem in each compartment is not too much to ask for? It would be a fantastic way to discover new poets, and remember old ones. Some revenue could be generated through the sale of books and posters. It would be a uniquely TO thing!

Until that happens, I can carry my book with me on the train. I can read my favorite poems, studiously ignoring the bright, garish and (for me) meaningless crap on the walls around me.

And if you fancy reading on, here are links to a few of my all-time faves, in no particular order:

The Listeners by Walter de La Mare
The Walrus and The Carpenter by Lewis Carroll
Still I Rise by Maya Angelou
You took away all the oceans and all the room by Osip Mandelstam
Her Anxiety by William Butler Yeats
Song to Celia by Ben Johnson
The Highwayman by Alfred Noyes
Preludes by T. S. Eliot
If I Could Tell You by WH Auden
Much Madness is divinest Sense by Emily Dickinson
Tarantella by Hilaire Belloc
One Art by Elizabeth Bishop
Knots by RD Laing
Butterfly by RD Laing

And yes, there’s a reason RD Laing is the only one listed twice…

Science fiction and fantasy writer. I blog at: ratiwrites.com Thanks for dropping by!
View all posts by Rati Mehrotra →
This entry was posted in Books and media, Writing and tagged poems. Bookmark the permalink.
Loading Comments...
%d bloggers like this: