There are trees standing in the water

There are definite advantages to living in the urban jungle that is Toronto. For one thing, 13% of the city is park area. (Another is the city’s lovely name, but I’ll come to that later.)

You find pockets of calm green in the unlikeliest places, surrounded by glass and metal towers and busy roads. One such spot is Fort York in the heart of downtown Toronto, bound by Bathurst Street on the east, the Gardiner Expressway on the south and the railway line to the north. It’s a historic site, reflecting the military basis for the founding of Toronto at a time (in the late 1700s) when tensions with the United States were running high. In 1812 the United States invaded Canada and Fort York was the site a pitched battle between the British and the Americans. The Americans occupied Fort York and burned down Government House and the Parliament buildings. The British, in turn, captured Washington and burned down the White House. The war finally ended in 1815. 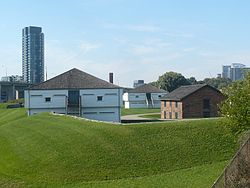 Today Fort York is a peaceful oasis that is a pleasure to stroll in. You can take tours, explore exhibits, and hear the canons boom every day in July. Last weekend, I was fortunate enough to watch a lovely and moving dance performance by the Kaha:wi Dance Theatre in Fort York, as part of the Indigenous Arts Festival.

Called “The Honouring”, the performance used music, songs, videos and dance to tell the story of the war of 1812 from the perspective of the Onkwehonwe families. Onkwehonwe means original people, or complete person, and refers to the First Nations. First Nations warriors and Métis fighters fought in the war of 1812, allying themselves with the British to repulse the Americans and protect their land, at great cost.

“You may rely on it that without the Indians we never could keep this country and that with them [on the British side] the Americans never will take the upper posts…for in the woods, where the Americans must past, one Indian is equal to three white men.”
– Canadian Militia Officer John Askin to Judge William D. Powell, Jan. 25, 1813

The performance was both poignant and uplifting, and surreal too, with Toronto skyscrapers against a darkening sky as the backdrop. It ended with the burying of the tomahawk, a symbol of peace.

Some hard facts to remember, however, before we get all warm and fuzzy:

1. There are currently over 630 First Nations governments or bands across Canada. The total population is nearly 700,000 people. This does not include the Inuit or the Métis. The Aboriginal Peoples trace their history in this land back for several thousands of years and, by some accounts, ‘own’ almost every acre of it. Possession and ownership being two absolutely different things, of course.

2. Although less violent than the confrontations between colonists and natives south of the border, interactions between Europeans and Aboriginals in what was to become Canada inevitably brought conflict, slavery, encroachment and disease that harmed the Aboriginal Peoples. The relationship is marked by blood and broken promises – and isn’t that true all over the world, whenever one nation or society imposes itself on another?

3. The true losers in the war of 1812 were not the Americans, but the Aboriginal Peoples. The British wanted to create a neutral Indian state in the American Northwest, and made this demand in 1814 at the peace negotiations at Ghent. The Americans rejected the idea, the British dropped it too, and thus Britain’s Aboriginal allies lost out. Abandoned by the British, Great Lakes-area natives ultimately assimilated into American society, migrated to the west or to Canada, or were relocated onto reservations in Michigan and Wisconsin.

As late as the 1960s, forced assimilation of First Nations children in Canadian Indian residential schools – in which children were punished for speaking their own language or practicing their faiths – tore children from their families, stealing a generation and leading to allegations of cultural genocide. It was not until 2008 that the Canadian Prime Minister issued a formal apology for the system of forced assimilation.

First Nations people today have a lower life expectancy, lower education level, higher suicide rates, and greater poverty levels than other people in Canada. Against this we measure the depth of their bond with the land in centuries past, the beauty of the many languages that must be preserved, and the promise of stewardship in a 21st century that needs it now more than ever.

Science fiction and fantasy writer. I blog at: ratiwrites.com Thanks for dropping by!
View all posts by Rati Mehrotra →
This entry was posted in Environment Matters and tagged First Nations, Fort York, Toronto. Bookmark the permalink.

2 Responses to There are trees standing in the water